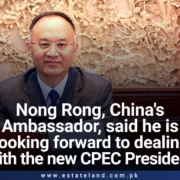 Nong Rong, China’s ambassador, said he is ‘looking forward to dealing with the new CPEC President

On Wednesday, Nong Rong, the Chinese Ambassador to Pakistan, congratulated Khalid Mansoor on his appointment as the Prime Minister’s Special Assistant for China-Pakistan Economic Corridor (CPEC) Affairs and expressed his eagerness to work with him.

“Congratulations to Mr. Khalid Mansoor, and we look forward to working together to promote #CPEC through high-quality development. Mr. Asim Saleem Bajwa, I would like to express my gratitude for your support for the advancement of CPEC. Our cooperation will be valued, with treasure our friendship, and will recognise our efforts,” the Chinese ambassador wrote.

Khalid Mansoor, who is he?

Mansoor has almost four decades of experience working with energy, petrochemicals, and fertilisers industries. His degree is in Chemical Engineering with Distinction and Honours. He will be in charge of the CPEC’s second phase, which will focus on industrial collaboration.

Mansoor is also a well-known business executive who has held the President of the Overseas Chamber of Commerce and Industry (OICCI). Since May 20, 2013, he has served as the Chief Executive Officer of the Hub Power Company Limited (Hubco). Mansoor has extensive expertise working with Chinese corporations and banks, according to Geo News.

Bajwa wished Mansoor success as he takes over as the prime minister’s special assistant for CPEC affairs. Mansoor, he claimed, was completely prepared to move CPEC forward. “CPEC is Pakistan’s lifeline; it will change us into a progressive, fully developed nation.”

Bajwa was appointed head of the CPEC Authority in November of this year.