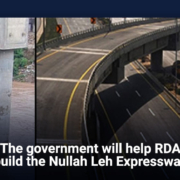 The RDA will develop the Nullah Leh Expressway with government assistance. People who read the news say that the Rawalpindi Development Authority (RDA) has decided to use only government money to finish the long-delayed Nullah Leh Expressway and Flood Channel. The project will now start in the next fiscal year, with the federal government providing 60% of the funds and the Punjab government providing 40%. This means that the project will start in the next fiscal year.

A group called the Executive Committee of the National Economic Council (ECNEC) had already approved the project’s funding in December 2012. The government has also come up with a new plan. They’ll pay for the project all on their own. Decision: The project was scrapped because of long delays in getting land and because it didn’t have a lot of potential for urbanization.

During a public hearing on May 11, the RDA is going to look over the project’s Environmental Impact Assessment (EIA). The project will start in New Katarian on I.J.P. Road and end at Soan Bridge near the Rawalpindi bench of the Lahore High Court in the city of Rawalpindi (LHC).

Proposed Concept-1 says that the width of the concrete nullah and dual carriageway at New Katarian would be 55 metres. As it neared Soan Bridge, it would widen to 80 metres (PC-1).

This is important to note: Frontier Works Organization (FWO) was recently given the project by the RDA.