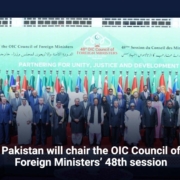 Shah Mahmood Qureshi, the foreign minister of Pakistan, gave his speech at the 48th Council of Foreign Ministers (CFM) meeting of the Organization of Islamic Cooperation (OIC), which started on Tuesday in Islamabad. He said that the meeting is a bridge between Muslim countries and the rest of the world, and that it helps solve problems in the Muslim world.

Before he started speaking, Pakistan took the lead of the 48th session of the moot. Foreign Minister Shah Mahmood Qureshi was in charge of the meeting.

Meeting: This year’s theme is “Building Partnerships for Justice and Development.” It’s a two-day meeting of the 57-member body of Muslim countries. Most of the states in the meeting at the ministerial level are from 46 of them. Other high-ranking officials will also be on hand to represent the rest.

Qureshi asked the OIC to come up with a collective answer to the problems facing the Muslim Ummah. He said that the OIC is the collective voice of nearly two billion Muslims.

“It is a link between Muslim countries and the rest of the world. Pakistan’s foreign policy is based on promoting unity and cooperation in the Muslim Ummah, which is one of its main goals “When Pakistan is chair of the 48th OIC meeting, he said that his main goal will be making sure that the Muslim countries work better together.

As Qureshi said: “The Muslim world has to deal with wars and occupation in the Middle East, as well as people who don’t have a say in their own lives.”

“It’s been a long time since the Muslims of Palestine and the Indian Illegally Occupied Jammu and Kashmir (IIOJK) have been freed from oppression. For the last seven decades, they have worked hard to get their right to self-determination, which is something they can’t give up “The foreign minister said that.

He said that Muslims are becoming more angry because of how often other countries intervene in Muslim countries. “Syria, Afghanistan, South Sudan, Myanmar, and Somalia are home to more than two-thirds of all refugees in the world.”

Qureshi said that Muslim countries are taking in the most refugees right now.

“While we must work to keep the Muslim world from being harmed by outsiders, only we can solve internal problems and fissures that we have to deal with ourselves. The key to ending these conflicts and disagreements is for all of the Islamic countries to work together “he said he thought about it.

The minister said that to fight ideologies of hate like Islamophobia and right-wing racism, people need to be strong and work together. “Muslims around the world have been hurt by a lot of incidents where the Holy Quran has been desecrated and caricatures have been reprinted. They also cause a lot of pain in the Islamic world.”

Prime Minister Imran Khan goes to the Parliament House in Islamabad to attend the 48th meeting of the Organization of Islamic Cooperation. APP
Imran Khan, Pakistan’s prime minister, will give a keynote address at the start of the first session. He will talk about Pakistan’s role and contribution to the OIC and the challenges facing the Muslim world.

Shah Mahmood Qureshi, the foreign minister, will give a speech after the bureau members are chosen.

More than 100 resolutions will be looked at over the course of the two-day meeting.

The agenda for the meeting includes a review of the events that have happened in the Muslim world since the last CFM meeting in 2020, as well as efforts by the secretariat to make sure that the resolutions that were passed at the last meeting are carried out, especially for Palestine and Al Quds.

Also, the people who were there would talk about Afghanistan and India-held Jammu and Kashmir.

There will also be talks about African issues and Muslims in Europe, as well as things that have happened in Yemen.

The agenda also includes Islamophobia, issues related to international terrorism, and cooperation in economic, cultural, social, humanitarian, and scientific fields, among other things.

Foreign ministers will visit the site of the Pakistan Day parade on March 23, and they will meet with people who work for Pakistan. He and OIC Secretary General Hissein Brahim Taha will hold a joint press conference later in the day. This will happen right after the meeting is over.