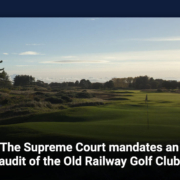 A three-judge panel presided over by acting Chief Justice Umar Ata Bandial heard the golf club’s case in question. While listening to the hearing, the court voiced its dissatisfaction with the non-issuance of a tender for the Railway Golf Club Liner project. The Supreme Court directs that the Old Railway Golf Club be audited.

Justice Ijazul Ahsan stated that no tenders would be called for the club’s lease for two and a half years. “Can you tell me how much more time the railways require to release tenders?”

“The railways’ minister hired an adviser instead of consulting with the railways’ secretary. Following his assumption of command, the adviser immediately began looting. The Supreme Court directs that the Old Railway Golf Club be audited.

“The consultant began to give honorary membership in the club to those who met certain criteria. As a result, several employees were terminated and hired others.”

Justice Ahsan wondered aloud where all the global capitalists with briefcases had vanished to. In his remarks, the acting chief justice stated that political involvement had damaged the previous management structure. Maintain transparency and honesty in all sectors, not only the railway industry. The Old Railway Golf Club will be audited, according to the Supreme Court.

According to the court, instructed the auditor general of Pakistan to perform an Old Railway Golf Club audit. The court also ordered that the club’s audit be completed as quickly as possible and that any subsequent hearings in the case be postponed indefinitely.