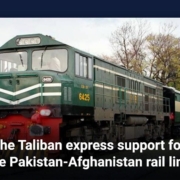 The Taliban express support for the Pakistan-Afghanistan rail link. The Taliban-led government approved a railway link between Afghanistan and Pakistan on Tuesday, paving the path for rail connections between Peshawar and Kabul and Peshawar and Jalalabad.

Additionally, approval was granted for a rail link to Uzbekistan. During the meeting, the new government’s cabinet also approved a rail link between Jalalabad and Kabul.

The first step would involve conducting feasibility studies and surveys, and the results of the first phase would be communicated with higher officials during the second phase of the project.

During the cabinet meeting, a change in police and armed forces clothing was also authorized.

The five countries — Pakistan, Afghanistan, Russia, Uzbekistan, and Kazakhstan — met last month to discuss the railway network connecting the states, a senior official working on the project said on condition of anonymity.

Russia would conduct a feasibility study and prepare reports on the project using superior technology, while other countries would install railway tracks on their own regions, he added.

“Previously, Pakistan and the Afghan government agreed to extend the railway track to Jalalabad, but the project was shelved due to security concerns; however, now that the situation has improved, we intend to extend the track to Mazar-e-Sharif with the assistance of donors,” the senior official added.

The feasibility studies for the railway routes are expected to be completed within the next four to three months, and two transshipment locations have been identified at the Torkham border and in Jalalabad, he added.

“The IITMS [International Institute for Transshipment Services] will be built with the assistance of Pakistan and Afghanistan, boosting trade between the member states and extending the track’s overall length to 800 kilometers till Mazar-e-Sharif.”

The project is not affiliated with the China-Pakistan Economic Corridor (CPEC), but is a collaborative initiative of the five countries focused at enhancing economic cooperation, he noted.

Meanwhile, Taliban spokesman Bilal Karimi confirmed that the five countries met a month ago and stated that they were collaborating closely with member governments to complete the project.

PM Imran “supported Uzbekistan’s attempts to acquire financing for the project by signing a Joint Appeal Letter issued to the Heads of various International Financial Institutions (IFIs) by the Heads of State/Government of Uzbekistan, Afghanistan, and Pakistan,” according to the official statement.

A 573-kilometer-long railway link will be created using funds raised through the joint appeal. The quickest economic track would connect Peshawar to Kabul and Kabul to Uzbekistan via Mazar-e-Sharif, with “27 stops, 912 artificial structures, and seven tunnels” to assist cargo transportation.