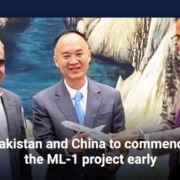 Pakistan and China have agreed to start the long-awaited Main Line-1 (ML-1) project early. The goal of the project is to update the country’s old railroad infrastructure. The news came out on September 29.

As far as we know, this deal was made between the Chinese Ambassador to Pakistan, Nong Rong, and the Minister for Railways, Khawaja Saad Rafiq. It was said that the project had been put off several times because of problems with the design and other things.

Under China-Pakistan-Economic-Corridor, the ML-1 project was said to be the biggest plan for building railway infrastructure (CPEC). It was approved by the Executive Committee of the National Economic Council (ECNEC) and is expected to cost USD 6.8068 billion.

During the meeting, the Minister of Railways, Rafiq, asked the Chinese Ambassador to think about working with Pakistan International Airlines to make a cheap airline (PIA). Under this project, the country’s small airports will be made to work, giving people better ways to get around. At the meeting, plans to start direct flights from Pakistan to Beijing and Guangzhou were also talked about.