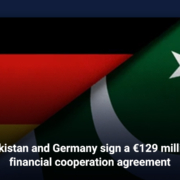 Pakistan and Germany sign a €129 million financial cooperation agreement for the development of multiple projects.