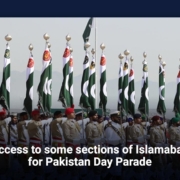 Access to some sections of Islamabad for Pakistan Day Parade
Islamabad: On Wednesday, news sources said that the government has said that some public places in the capital city will be closed because of full-dress rehearsals and the Pakistan Day Parade (March 9). Meanwhile the national day parade in Islamabad on March 23, the Parade Ground will be filled with people from all over the country.

People say that Islamabad Deputy Commissioner Hamza Shafqaat has told some public places in the city to stay closed on March 16, 18, 20, and 23. The following public places will be closed:

Anyone else who owns or runs a big business on Garden Avenue, near the Parade Ground, that could have an impact on traffic control or security on those dates
Reports say that preparations for the National Day Parade are well under way, and the military is also planning exercises for the event. A lot of people say that foreign ministers from the Organization of Islamic Cooperation are going to join this year’s march, according to the news (OIC). It’s because of this that the government in Islamabad has put in place watertight security for the event.

Read more with EL news : Monal management intentionally misleads the SC to have the premises de-sealed

For the OIC Council of Foreign Ministers’ (CFM) 48th meeting and Pakistan Day, Federal Interior Minister Sheikh Rashid Ahmed has set three days off in Islamabad for three days. The 22nd, 23rd, and 24th of March have been made public holidays by the city government.