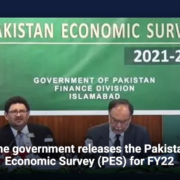 Read more with EL news: A steering committee will look at the Gwadar projects

Finance Minister Miftah Ismail and other federal officials showed the report to the public in Islamabad. The minister said that the government met all of its major growth goals for FY22. Agriculture grew by 4.40 percent, industries grew by 7.19 percent, and services grew by 6.19 percent. This means that all three of these major sectors grew faster than their own growth goals of 3.5%, 6.5 percent, and 4.7%. In the same way, the report showed that from July to March of FY22, exports of goods went up by 26.6 percent, totaling USD 23.7 billion, while exports of services went up by 17.1 percent, totaling USD 5.1 billion.

Economic-Survey-2021-22Download
On the tax side, the report shows that FBR tax collections went up by 28.5% between July and March of FY22. During this time, PKR 4.85 trillion was collected, which is more than the PKR 3.77 trillion that was collected during the same time last year. The fiscal deficit, on the other hand, grew from 3 percent of GDP in July to March FY22 to 3.8 percent of GDP during the same time period this year, according to the survey.

Read: The GoP will sell state land, and a way to figure out the market rate has been approved.

Some of the other important numbers in the report for FY22 are: