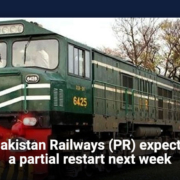 LAHORE: The government wants to get railway service back up and running as soon as possible in Sindh, Baluchistan, and other affected parts of the country. The Pakistan Railways (PR) says that passenger train service may not be back up and running for a few days, depending on how quickly the water recedes from the rail tracks.

“Resuming some rail operations could take three to four days, even though PR teams have already started working in different places. We might be able to start again by Tuesday if it doesn’t rain or flood in the next few days and the water goes down, a senior PR official told Dawn on Friday.

He said that parts of the track between Rohri and Tando Adam, Paddidan and Bhiria, Daur and Bandhi, and Bocheri and Nawabshah are currently under 5 to 15 inches of water. The Nawabshah yard is also flooded, and the signalling system at railway yards doesn’t work because of flooding and loss of power.

While this was going on, Federal Minister for Railways Khwaja Saad Rafique led several meetings at the Railway Headquarters in Lahore. He told the administration to finish the survey of the damaged installations as quickly as possible and speed up the process of rebuilding. When the flood water goes down, he told the administration to work in three shifts to fix the tracks.

The minister was also told what was being done to fix the damaged bridge on the section of the road between Sibbi and Quetta. The minister told the officers to connect Quetta as soon as possible to the national railway network. He also looked over the plans for getting aid supplies from Turkey by train through Iran. He was also told about how the railways were going to switch to the latest ERP system.

“Most railway management issues will be handled by IT with the ERP system,” he said.

He was also told that freight operations from Karachi would start up again. He hoped that by Monday, the amount of freight will be back to normal. “The Karachi passenger train service could start after making sure people are safe,” he said.