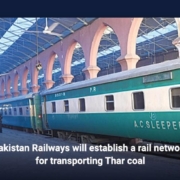 News sources said on October 20 that the Pakistan Railways (PR) will build a 105-kilometer-long railway network to move coal from the Thar coal mines to other provinces.

During a briefing by the PR on current development projects in Sindh, the information was given to PM Shehbaz Sharif. Reports say that the project would cost PKR 58 billion, which would be paid for equally by the federal and state governments. According to the plan, the railroad track will be finished by March 23 and will be used to send coal from around the country to brick kilns. From Islam Koat in Thaparker to the Chor in Sindh, near Umer Kot, the track will go.

Also, PM Shehbaz put together a group led by Planning Minister Ahsan Iqbal and Sindh Chief Minister Syed Murad Ali Shah to look into how much coal is available from the Thar Coal Mines and how much is needed on the local market. The group has 72 hours to report back. The Thar Coal Mines are Pakistan’s biggest coal mines, with the ability to produce billions of tonnes of coal. As part of the China-Pakistan Energy Corridor (CPEC) project, the government has just started looking into mines to cut down on the amount of coal it needs to import.