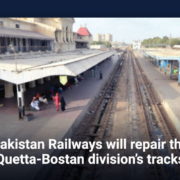 Pakistan Railways will repair the Quetta division’s tracks. According to news reported on July 25, Pakistan Railways (PR) has begun restoration work on the 33.5-kilometre-long track known as “sleeper renewal” that runs between the Quetta-Bostan and Quetta-Chaman sections.

According to an anonymous official source in the Ministry of Railways, this track will be more accessible for travelers to use and will enhance connectivity between the three major Baluchistan cities. Additionally, he claimed that the department had improved local railroad service by obtaining PC-I approval for the track’s restoration and beginning work to renovate a second 100-kilometer stretch of track on the Quetta-Taftan segment between Ahmedwal and Dalbadin. Baluchistan’s Quetta railway network contains the tracks Quetta-Chaman, Dera Allah Yar Sibi-Quetta, Sibi-Khost, Bostan-Zhob, Spezend-Dalbandin-Taftan, and Spezend-Dalbandin-Taftan, according to the same source.

The length of the province’s railway network, which includes the now-closed Bostan-Zhob stretch, was also disclosed to be over 1,470.36 kilometers. However, the official emphasized that specific segments of this network are over a century old and that certain speed restrictions are in place on several stretches because of delayed maintenance and resource limitations. In addition, the Quetta-Chaman portion’s 160.024-kilometer-long track between Bostan-Chaman and the Quetta-Taftan section’s 100-kilometer-long track between Kohi and Taftan were supposed to be undergoing restoration work.