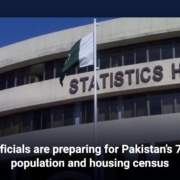 Asad Umar, the Minister for Planning, Development, and Special Initiatives, said that work on Pakistan’s seventh digital population and housing census is underway. The final results will be released in December.

The census is meant to be transparent and accurate, which will help Pakistan make smart development policies and distribute resources fairly across the country.

Out of the Rs5 billion that was set aside for the project, Rs10 million will be used to buy software and hardware for the digital census. Officials in Pakistan are getting ready for the country’s 7th population and housing census.