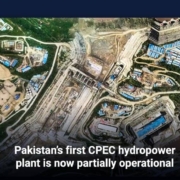 Read more: The CPEC enters a new era of high-quality growth, according to the NDRC

Read more with EL news: Khayaban-e-Iqbal Road will be connected to Margalla Road via 2 interchanges: CDA

On the banks of the Jhelum River in Punjab, the power plant is located. With a capacity of 7,200 megawatts installed, it has the potential to create over three billion kilowatt hours of renewable energy per year.

Apart from providing work for Pakistanis, it will also reduce the cost of electricity. The Chinese firm China Three Gorges Corporation has invested $1.7 billion in the project.

Once completed, the hydropower project is estimated to contribute to a reduction of 3.5 million tonnes of carbon dioxide emissions in Pakistan each year, according to Chinese media. It is anticipated that the project will be completed in April 2022.