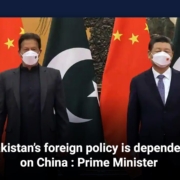 Prime Minister Imran Khan stressed on Sunday that Pakistan’s relationship with China is “the cornerstone of its foreign policy,” as both sides reaffirmed their support for each other on “core interests” problems.

Pakistan expressed its “commitment to the One-China Policy and support for China on Taiwan, the South China Sea, Hong Kong, Xinjiang, and Tibet” in a joint statement made following PM Imran’s meeting with Chinese President Xi Jinping.

“The Chinese side reaffirmed its commitment to Pakistan’s sovereignty, independence, and security, as well as to its socioeconomic development and prosperity,” it added.

According to the statement, “the two nations’ leaders engaged in an in-depth discussion of the full range of bilateral relations, as well as the regional situation and worldwide political environment.”

Read: Tarin’s visit to China is ‘critical’ for Pakistan’s economy

“Both parties recognised the critical importance of CPEC projects, notably in the energy and transportation infrastructure sectors, in bolstering Pakistan’s leadership role in regional connectivity while modernising its economic basis.”

They also reaffirmed their commitment to completing the CPEC projects on time, while promising to further “use the private sector and entrepreneurs” to help Pakistan industrialise.

“Both sides reaffirmed their commitment to defending CPEC against any threats and malicious propaganda,” the statement continued. The Chinese side also expressed appreciation for the establishment of the Pakistan-China Business and Investment Forum, the statement stated.

“The leaders decided to charge the CPEC Joint Collaboration Committee (JCC) with enhancing cooperation in all sectors,” the statement stated.

The two sides emphasised Gwadar’s importance as a central pillar of CPEC and a critical node for regional connectivity, the statement said, adding that “in accordance with the “1 + 4″ layout, the two sides agreed to jointly accelerate the construction and operation of Gwadar Port and develop a low-carbon circular economy zone in Gwadar.”

According to the statement, Pakistan’s and China’s leaders agreed to develop Gwadar for its citizens’ socioeconomic advantage.

Pakistan also reaffirmed its commitment to the security of all Chinese workers, projects, and institutions in Pakistan during the conversation.

“Both parties agreed that the CPEC was a win-win venture that was critical to regional economy and connectivity. Third parties were welcome to profit from investment opportunities in CPEC SEZs as an open and inclusive program,” the statement continued.

The two sides expressed satisfaction with their bilateral cooperation and mutual support following the outbreak of the Covid-19 pandemic, according to the statement, adding that it was also decided to expand existing collaboration for developing emergency response systems, public health infrastructure, and joint ventures to develop Pakistan’s pharmaceutical industry.

Both countries committed to consolidate and enhance bilateral trade relations through full implementation of the Pakistan-China Free Trade Agreement’s second phase, according to the statement.

The two sides expressed delight that the 15th Session of the Pakistan-China Joint Committee on Economic, Trade, Scientific, and Technical Cooperation would be held successfully in December 2021.

In line with the November 2018 Memorandum of Understanding on Tourism Exchanges and Cooperation, the two sides agreed to commemorate the Pakistan-China Year of Tourism Exchanges in 2023 and to strengthen ties between the two countries’ tourism promotion agencies and private firms.

China and Pakistan also agreed to “maintain momentum in defence cooperation at various levels” between Pakistan’s and China’s armed services. “They emphasised the critical role of enhanced defence and security cooperation between Pakistan and China in ensuring regional peace and stability,” the statement stated.

They also emphasised the critical nature of resolving any remaining problems in order to enhance regional cooperation and the region’s goals of stability and shared prosperity. Chinese officials were also briefed on the Kashmir issue.

“The Chinese side reaffirmed that the Kashmir conflict was a relic of history that should be settled correctly and peacefully in accordance with the United Nations Charter, relevant Security Council resolutions, and bilateral agreements.”

According to the statement, Pakistan and China also agreed that a stable Afghanistan was necessary for regional prosperity.

“The two sides emphasised the importance of expediting humanitarian assistance…to avert the coming crisis and urged the international community to continue and expand its assistance and support to Afghanistan, particularly by unfreezing Afghanistan’s financial assets.”

On behalf of Pakistan, the Prime Minister renewed his invitation to President Xi to undertake a state visit to the country and added that the Pakistani people look forward to receiving him soon.