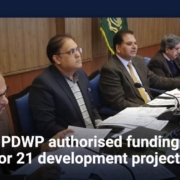 On August 25, news sources said that the Provincial Development Working Party (PDWP) gave money for 21 development projects all over Punjab.

At the 5th meeting of the PDWP, the Chairman of the Planning and Development Board, Abdullah Khan Sumbal, gave the go-ahead for the development projects. During the meeting, the following projects were given the green light:

For the repair of the 11.25-kilometer-long Shahi Road from Feroza to Khanpur district Rahim Yar Khan, PKR 598.5 million has been set aside.
Rangpur Chowk Munda Road, which is 32 kilometres long and is in the district of Muzaffargarh, has been given PKR 1.39 billion to repair and improve it.
A budget of PKR 1.665 billion has been set aside to build a two-lane road from the M-3 Motorway Samundri Interchange to the city of Samundri.
Faisalabad-Satiana Road from By-Pass to Tandlianwala (Phase-I: Km No.13.93 to 34.54, Length = 20.61 Km, District Faisalabad) will be fixed up with PKR 572 million (Revised)