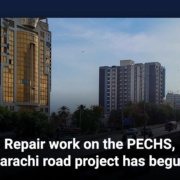 Repair work on the PECHS, Karachi road project has begun. A lawyer for the Karachi Metropolitan Corporation (KMC) says that road repair work has begun in many parts of the city, including the Pakistan Employees’ Cooperative Housing Association (PECHS), officials said Tuesday (March 1).

There will be a new Federal B area built and the Karachi Zoo will be restored by the KMC,

Shabbirabad Johar Road, which links PECHS’s Ameer Khusro Road and Tipu Sultan Road, is being built by the KMC. The KMC manager said that the road cost Rs 35 million to build. Work on the construction was going on at the same time as the repair of the underground pipeline. Information says that the road will be done by March 20th.

In a report, KMC is said to be done with the first part of a 6-kilometer McDonald’s to the Karachi nuclear power plant on the Hawksbay Road. A 5.5-mile road was built in the Federal B Area Block 4 to connect Shalahef Mayun and Shawariura Road. Wahab, the head of the KMC, said that the Alterf Hussein Barrelbi Road has been paved and the bridge from Kashmir Park to Riaqua Tabard has been repaired.