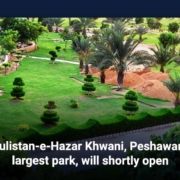 During the trip, the chief minister also opened the new building of the Shaikhabad Girls High School, which cost Rs50 million.

At the opening ceremony for Hazar Khwani Park, the chief minister said that the provincial government had given the park to the people of Peshawar as a gift. He also said that the park had made Peshawar City even more beautiful. “One day a week would be set aside for families to come to this mega park,” he said.

The chief minister said that old parks were being fixed up all over the province and that a PC-I worth Rs14 billion to build the missing link of the ring road had also been sent to the proper forum for approval. In the same way, he said that a new general bus stand was being built outside the city to solve the traffic problems in Peshawar City. This will be a permanent solution to the problem when it is finished.

He also said that work was going on at the new Peshawar Valley City, a vast housing project being built by the provincial government using a land-sharing plan.

“All government offices, including the office of the Chief Minister, will be moved to the new Peshawar valley,” he said.

Mahmood Khan made it clear that the projects were also working on getting clean drinking water from the Mohmand and Jabba Dams to the people of Peshawar. He told the 20 people who work for the Peshawar Development Authority in Hazar Khwani Park that each of them would get a prize equal to one basic pay.

The chief minister said he was grateful to the people of the whole province for supporting Imran Khan and the PTI movement for the country’s real independence. He wanted millions of people to take part in

Imran Khan, their leader, asked them to march for independence.