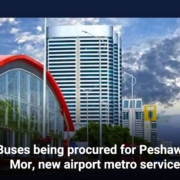 Buses being procured for Peshawar Mor, new airport metro service. The metro bus project from Peshawar Mor to New Islamabad Airport appears to be on track, with municipal authorities preparing to place orders for 30 buses following the opening of financial bids.

The Capital Development Authority (CDA) took over the project from the National Highway Authority in March this year, at the order of the federal government.

The government has allocated Rs300 million for this project in the fiscal year 2020-21.

The CDA’s technical committee accepted financial proposals from corporations, with an overseas company – Higher Bus Company Limited – emerging as the lowest bidder with a Rs728 million bid for 30 buses.

CDA officials stated that the bids were opened in all three qualifying bidders and members of the Financial Evaluation Committee.

They stated that Foton and Auto Park bid Rs33 million for each bus, while Master Motors Corporation bid Rs29.8 million.

On the other hand, Higher Bus Company made a price of Rs24.2 million for each bus, totaling Rs728 million.

They stated that buses would be available within four months.

They stated that 24 buses would operate round the clock from Peshawar Mor to the N5 bus station on G.T. Road, while six others with additional luggage room would go from N5 to the airport.

The metro track’s corridors and stations had already been constructed; the command and control, ticketing, station administration, cleanliness, and security systems remained.

The National Highway Authority (NHA) handed over the project to the CDA in March this year, following the completion of the route and stations.

The NHA began construction of the 25.6-kilometer-long track from Peshawar Mor to IIA in January 2017 for Rs16 billion.

Although the project was originally scheduled to conclude in August 2018, the civil construction was completed earlier this year.