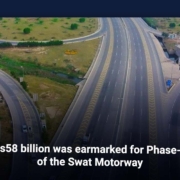 Rs58 billion was earmarked for Phase-II of the Swat Motorway. Mahmood Khan, the Chief Minister of Khyber-Pakhtunkhwa, says he will start work on the Rs58 billion Swat Motorway Phase-II next week. This is another big project for the Malakand Division.

As the head of the Pakhtunkhwa highway authority on Monday, he told everyone to make sure that everything was in order before work could start on the project.

Officials at the meeting explained the essential parts of the Swat Motorway Phase II. At first, this motorway will have four lanes, but it can be expanded to six lanes shortly.

At least eight bridges would be built over the Swat River. Construction of four rest areas in different places is also part of the project, and link highways may also be built if they’re needed as well.

Then, the CM told the people who were in charge of the Dir Motorway project to speed up the process of getting land for it and to quickly process the PC1 so that work on the project could start right away.

The meeting went over in great detail the progress of a lot of different road projects, like the Dir Motorway and the Swat Motorway Phase II.

Meeting participants learned about progress made on Phase 2. They knew that an 88-mile motorway would be built from Chakdara to Fatehpur, costing $58 billion, and that a concessionaire would do the project. $6.7 billion was released for the purchase of land for the project.

In addition, Section 4 had been put in place so that 70 km of land could be bought for the project.

Officials were giving a briefing about the Dir Motorway. They said that the Expression of Interest for a 30 km long Dir Motorway had been put out earlier, and that the motorway would be built from Chakdara to Rabat.

As many as three interchanges, four flyovers, 24 bridges, and two tunnels would also be built, along with two tunnels.

Besides providing good transportation, these projects would also provide jobs for the people in the area.