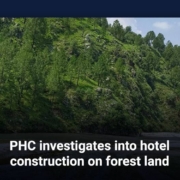 PHC investigates hotel building on ‘forest land.’ On Thursday, the Peshawar High Court asked the Abbottabad district administration to investigate the alleged encroachment of Ayubia National Park forest land for the construction of a five-star multi-story hotel in the Nathiagali tourism region.

The bench asked additional deputy commissioner Mohammad Shahab to inspect the premises, conduct an investigation, and submit a report to the court.

It noted that during one of the hearings, the director-general of Galiyat Development Authority testified and disputed the allegation of forest land encroachment, implying that if the claim is determined to be untrue, it will take action against the DG.

Senior advocate from Hazara division Sardar Nasir Aslam informed the bench that the ongoing building of the five-star hotel breached the norms.

He pointed out that around six kanals of Ayubia National Park forest land had been incorporated in the area allocated to the relevant firm for the hotel, which was against the law.

The bench, known as the green bench, took up numerous environment-related petitions filed by lawyers for consideration.

The court has already ordered the demolition of encroachments alongside the Swat, Kunhar, and Chitral rivers during prior hearings.

According to Zaheerul Islam, the administration has already demolished 68 hotels for being erected unlawfully on the riverbed in response to the court’s ruling.

He added that all leases for sand mining from the river had been annulled and had obtained no new licenses.

An assistant commissioner informed the court in Hazara that the administration had demolished approximately 160 large structures and 6,000 tiny ones along the region’s rivers.

Advocate Babar Khan Yousafzai attended on behalf of several investors and stated that his clients had invested considerably in the Samandar Katha Lake project near Nathiagali following a valid government contract win. But, still, it destroyed the project on the high court’s orders. Therefore, he sought redress on behalf of the petitioners.

The court, however, stated that the investors should sue the officers engaged in the wrongful awarding of the project contract. PHC investigates hotel building on ‘forest land.’

The bench was also informed that the administration took the boats sailing in the famous Saiful Malook Lake. However, the bench noted that it performed all of those acts in its direction.

The chief justice asked what the officers were doing while those boats were cruising in the lake before issuing the court’s instructions. PHC investigates hotel building on ‘forest land.’

The bench stated that it will make no concessions on environmental protection and that all relevant officers should step up their efforts to carry out its directives. PHC investigates hotel building on ‘forest land.’

The chief justice observed that the country might face severe water scarcity in the future, yet nobody seemed concerned. He noted that, sadly, people continued to encroach on rivers while the appropriate authorities remained dormant.