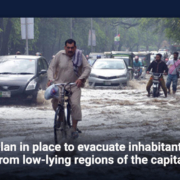 Plan in place to evacuate inhabitants from low-lying regions of the capital. As a precaution against flooding from rivers and streams and heavy rains, a plan has been made to move people out of low-lying areas.

Irfan Nawaz Memon, the Deputy Commissioner of Islamabad, told the media on Friday about the steps taken to evacuate people and the rescue plans in case of heavy rains and flooding in the capital’s rivers and streams.

In case of emergency and if needed, more relief camps will be set up at government schools, the DC said. He added that the IMCG Bari Imam, IMCG Muslim Colony, IMSG F-7/4, IMS G-7/1, IMS G-7/2, Church F-6/2, IMC I-9/1, Model School for Boys G-8/1, Korang Town, Soan Garden, Sihala Union, and MC Rawal Town would be among the places where camps would be set up.

Mr. Memon said that if there were floods, the people who were hurt would be moved to the relief camps, which would have food and generators. In the camps, there would also be medical care.

Mr. Memon said that rescue teams will be given five boats to move people from low-lying areas to relief camps in case of flooding.

He also told all of the housing societies that they need to make plans right away to set up their own relief camps.

The DC also said that the opening of spillways has been coordinated with the Rawal Dam Authority. The authority will let the capital administration know before opening the spillways so that precautions and safety measures can be taken.

The relevant authorities have also been told to take down the encouragement along the nullahs, the DC said. He also said that assistant commissioners and officers of the CDA are keeping an eye on the arrangements.

DC Memon said that section 144 of the CrPC was put into effect in the capital, making it illegal to bathe or swim in any of the capital’s nullahs or dams.

He told people to keep them away from nullahs and dams so that nothing bad would happen.