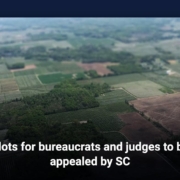 Plots for bureaucrats and judges to be appealed. On Monday, the Supreme Court will hear petitions challenging the Islamabad High Court’s (IHC) restraining orders prohibiting judges, officials, and government personnel from being allotted plots in the capital’s F-14 and 15 sectors (tomorrow).

Several working and retired federal government employees have filed two petitions with the Supreme Court challenging the IHC’s August 20th and September 13th judgments, pleading with the supreme court to prevent the IHC from making similar orders against the petitioners.

Earlier this year, the Federal Government Employees Housing Authority (FGEHA) filed challenges against these IHC judgments through Akram Sheikh lawyer. All of these petitions will be heard on Monday by a three-judge apex court bench presided over by Justice Umar Ata Bandial and comprised of Justice Syed Mansoor Ali Shah and Justice Sajjad Ali Shah.

It is understood that numerous Supreme Court judges benefited from recent balloting for plots in the F-14 and F-15 sectors. Six judges previously recused themselves from hearing a lawsuit involving the cancellation of a federal government housing programme in the federal capital’s F-14 and F-15 districts.

The petitioners stated that they were allottees of plots/land in Islamabad’s sectors F-14-F-15 and had submitted the appropriate payment with the FGEHA instead of their assigned stories for a lengthy period.

Additionally, they contended that the issue of whether they could have acquired the land for the FGEHA was not the topic of the writ petition; however, the IHC’s order on Sept 13, 2021, stated otherwise and went beyond their petitions, which were not the subject of the court’s decision.

“The petitioners are gravely harmed as a result of the impugned order dated Sept 13 given by the division bench of the IHC under unconstitutional,” a petition stated.

Additionally, the petition said that previous to 2009, the FGEHA provided housing to personnel assigned to certain schemes based on their age and seniority in government employment through scheme-specific programmes.

The FGEHA, it continued, would advertise a membership drive for the new scheme at the time of its debut, and employees would be assigned housing within that scheme based on their date of birth or seniority within the relevant government cadre.

Additionally, the petition noted that while exercising its jurisdiction in the instant case, “the high court, with due respect, has issued an order that constitutes judicial overreach and so demands intervention” by the supreme court.

Additionally, the IHC prevents judges from being assigned plots.

“Constitutional jurisdiction under Article 199 would not exercise in a vacuum, especially when all contentious issues concerning the acquisition and public interest/public purpose were adequately resolved earlier with admirable clarity by this court’s larger bench in its reported judgement 2021,” it stated.

“The high court failed to appreciate while exercising its jurisdiction, that an aggrieved person must have a dispute before exercising judicial power under Article 199 of the Constitution, and that this is a necessary pre-requisite for invoking the jurisdiction under Article 199 of the Constitution, and thus the impugned order is not sustainable.”

The petition said that the IHC could not re-establish or re-assess the proceedings on this court’s previously determined subject. Those principles had been articulated further in other supreme court rulings.

“The high court failed to grasp and apply the idea and meaning of aggrieved or aggrieved person as defined in Article 199 of the Constitution,” the petition said.

According to the petition, the high court exceeded its constitutional authority and violated the rules of supervisory jurisdiction in Article 199 of the Constitution and declared by this court.