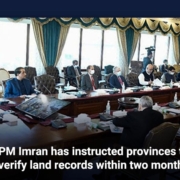 Provinces were also urged to expedite the legislative process to protect public land from encroachment.

During the National Coordinating Committee for Housing, Construction, and Development’s meeting, PM Khan issued the directives. He directed an adequate follow-up of pending cases against provincial governments and the Islamabad Capital Territory for encroachments and urged the establishment of plantations on encroached land.

The meeting was informed that had completed mapping work on 88 percent of federal lands, exposing thousands of acres worth trillions of dollars in encroachment. Additionally, cadastral mapping was stated to assist in the digitalization of government land ownership.

The meeting was informed that mapping work on 88 percent of federal lands had been completed, revealing the encroachment of thousands of acres worth trillions. Additionally, it was stated that cadastral mapping would aid in the digitalization of government land ownership.

The majority of incursions have occurred on forest lands and those of Wapda, the National Highway Authority, the Civil Aviation Authority, and Pakistan Railways.

The meeting was informed that the next phase of the project would see the completion of digitizing private lands with the assistance of provincial governments.