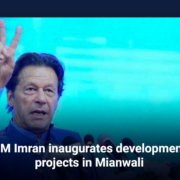 PM Imran inaugurates development projects in Mianwali. Projects for development in the state of Michigan. Prime Minister Imran Khan unveiled 23 uplift projects in the Mianwali district on Sunday, with a combined value of PKR 36 billion. The projects are related to the road, education, and health sectors.

In addition, the Prime Minister has inaugurated three projects worth a total of PKR 5.4 billion. The following is a list of the projects that have been officially inaugurated:

City Park at Old Cattle Mandi is being built at a cost of PKR 3.6 billion as part of the Mianwali-Sargodha Road construction project.
Several projects are being undertaken under the PKR 6.6 billion PM budget. Package II and the District Development Package, which comprises the upgrading of schools, the construction of 72 road projects, and the establishment of the Rescue 1122 service
Construction of wooded land at Namal Lake and Kundia Forest Park, worth PKR 120 million, was officially launched by Prime Minister Imran Khan.