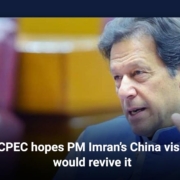 CPEC hopes PM Imran’s China visit would revive it. The government hopes that Prime Minister Imran Khan’s four-day trip to China, which starts today, will help the China-Pakistan Economic Corridor (CPEC) project get back on track.
Prime Minister Imran Khan on Wednesday, Fawad Chaudhry told Dawn that China’s leaders will have to talk about 21 different topics. He said this after attending a series of meetings with Khan at the Prime Minister House.

The Prime Minister will talk about Special Economic Zones, trade, information technology, agriculture, and the move of huge Chinese factories to Pakistan when he comes to Pakistan next month.

Statement: The Foreign Office said that Prime Minister Khan would meet with President Xi Jinping and Premier Li Keqiang one-on-one, and that they would also meet with each other.

During the project, the government wants to open up 21 new sectors, like trade and IT.

There will be a lot of talk about how to improve trade and economic ties between the two countries, including the China-Pakistan Economic Corridor.

Another thing that the FO said was that the prime minister was going to China at the request of the Chinese government.

When the Pakistan Tehreek-i-Insaf (PTI) came to power three years ago, many people thought that the CPEC had slowed down. However, the government thinks that the PM’s upcoming trip will help projects that are either being done or haven’t started under the CPEC umbrella.

PM Khan has said many times that his government has changed the focus of CPEC from road infrastructure to industrialization, energy, and farming.

He said that this time they were better prepared and had done a comparative study of the opportunities Pakistan could offer Chinese investors. This is what Khalid Mansoor told Dawn.

During a joint working group meeting, the two countries talked about 10 different topics. He said that meetings had been set up with important Chinese industrialists, who will meet the PM when he visits.

It says that during his time in Beijing, the prime minister will meet with prominent business leaders, representatives of top Chinese think-tanks, academia, and the media, among other things.

On Wednesday, the prime minister chaired a high level meeting ahead of his upcoming trip to China. He said that he was sure that his trip would take the strong bilateral ties that already existed between the two countries to new heights.

There were a lot of federal ministers at the meeting, including Shaukat Tareen and Fawad Chaudhry. They were joined by Commerce Adviser Abdul Razak Dawood, State Minister Farrukh Habib, National Security Adviser Moeed Yousuf, and Shahbaz Gill.

Prime Minister Khan will also meet with Chinese officials about the CPEC during his trip to China. He will also be at the Winter Olympic Games Opening Ceremony.

Despite the COVID-19 pandemic, the Chinese government has done a great job planning for the Winter Olympics, says the statement from the FO.

With more than 140 events planned, the prime minister’s visit will be the end of a series of events to show how strong Pakistan and China’s all-weather strategic cooperation partnership is, even as a Covid-19 pandemic spreads and the international situation changes.

“It would then reaffirm the two countries’ commitment to taking their “iron-clad” relationship to new heights and boosting cooperation in a wide range of fields,” the Foreign Office said in a statement.