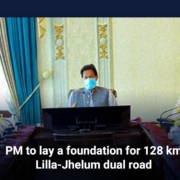 PM to lay a foundation for 128 km Lilla-Jhelum dual road. On Tuesday, Prime Minister Imran Khan expressed pride in his government for taking measures to safeguard future generations’ futures rather than focusing exclusively on obtaining votes in elections.

He stated that the administration handled pollution, deforestation, water scarcity, and food shortages compared to previous governments, who spent lavishly on road development at inflated costs at the expense of the populace.

He made the remarks during the groundbreaking ceremony for the 128-kilometre Lilla-Jhelum dual highway, which would be finished in 30 months at Rs16 billion and will connect the Khushab, Mandi Bahauddin, Gujrat, and Mirpur regions.

Mr Khan stated that a country could not advance if its leaders disregard its citizens and limit their approach to garner votes.

Read more with EL news : A recovery authority has been established to reclaim government

After five years, he asserts, his party would emerge victorious in the public’s eyes by achieving progress and prosperity goals.

He added that the country was finally getting three large dams after 50 years, as the administration recognised the impending threat of water scarcity.

He stated that due to previous governments’ inaction, relentless tree cutting had reduced several towns, including Lahore, formerly known as the City of Gardens, to a concrete jungle. The prime minister stated that his government has planted over 2.5 billion trees and intends to plant a further 10 billion in the future years.

He stated that throughout the epidemic, the government’s sensible policies won global acclaim following the National Command and Operation Centre’s judgments (NCOC).

“I am proud of our team for guiding the country through the century’s greatest struggle,” he said. The prime minister expressed confidence that the administration will successfully navigate through the current phase of inflation brought about by the global situation.

“In the coming days, we will reveal a significant package aimed at providing relief to the average man,” he stated.

After completing the five-year tenure, he stated, the Pakistan Tehreek-i-Insaf (PTI) would be considered successful in the nation’s eyes for achieving development and prosperity aims.

Usman Buzdar, Punjab’s Chief Minister, said the road would open up economic and trade prospects for the region’s residents, particularly in north Punjab.

He stated that over 103 projects worth Rs11.3 billion were implemented in Jhelum under the District Development Program. He stated that the Punjab government would develop four roads totaling 5,006 kilometers in partnership with the Asian Development Bank.

Chaudhry Fawad Hussain, Minister of Information and Broadcasting and Member of Parliament from Jhelum, stated the Lilla-Jhelum route would connect the Grand Trunk Road to the motorway. PM to lay a foundation for 128 km Lilla-Jhelum dual road