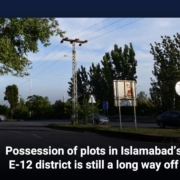 Possession of plots in Islamabad’s E-12 district is still a long way off. The E-12 allottees are still awaiting possession of the plots they purchased in 1989 from the Capital Development Authority (CDA).

The CDA was required to turn over-developed plots to allottees within a year of allotment in 1990.

They are, however, scurrying from pillar to post to obtain their plots, even though it has been 32 years.

On the other hand, CDA announced last year that it would resolve the issue. Road construction began and continues at a snail’s pace.

According to sources, the landowners (also known as land affectees) claimed their dues remained unpaid and were entitled to obtain alternative plots before vacating the area.

Read more with EL news : The Leh Nullah Expressway’s width has been lowered

In 1989, allottees purchased plots from the CDA.

CDA officials stated that following the civic agency’s plan; affected residents would be assigned plots in I-12 to obtain possession of E-12.

The officials stated that while many affected individuals had already received compensation, there were still others who needed to be compensated.

“Until we resolve the issue of affected parties, we will be unable to make significant progress on E-12 development,” a CDA engineer stated. He added that the federal cabinet recently directed the CDA to resolve the E-12 issue.

“When my wife and I married in 1989, she received an allotment letter for a plot in E-12, but this sector has remained undeveloped since then. I retired from the military and still have no hope of building a house in this sector,” an allottee explained.

Syed Asif Ali, the CDA’s spokesperson, stated that the management focused on all stalled sectors. Work has begun in several stalled sectors, including E-12, over the last few years. “We are focusing on this sector,” he said.

When contacted, Special Assistant to Prime Minister (SAPM) on CDA Affairs Ali Nawaz Awan said that the CDA was all set to resolve the issue of E-12.

“Recently, the federal cabinet also directed for resolving the issue of E-12. We will develop this sector to provide relief to allottees as well as affectees,” he said.

Sector I-15
On the other hand, there is a positive development in the stalled sector of I-15, where development work is in progress. Sources said that out of the total 10000 plots, around 3000 are ready for possession.

Last year, the CDA started development work, including streets and roads, and a significant portion of the work has been completed.

Officials said by the end of next year, the entire development work will be completed.

They said work was in progress in sub-sector 1/3 and 4, while soon CDA will call tenders for sub-sector I-15/2.