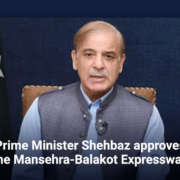 Prime Minister (PM) Shehbaz Sharif has given the go-ahead for the Mansehra-Balakot Expressway to be built so that the Kaghan Valley can attract more tourists. This was reported on September 17.

Also, the news sources said that the federal government has already talked about big plans for the Hazara division. It was said that PM Shehbaz has given the go-ahead for the division to build roads, an airport, natural gas projects, an electric supply company, and grid stations.