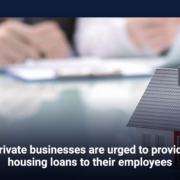 Private businesses are urged to provide housing loans to their employees. He told businesses to get loans to build low-cost homes for their workers on Friday. Dr. Reza Baqir, the governor of the State Bank of Pakistan, said that on Friday (March 11). It was said that the central bank would take the risk of getting the money and lending it.

Read more with EL news : Minister directs the preparation of a master plan for Hyderabad

Baqir told the president of the Lahore Chamber of Commerce and Industry, Mian Nauman Kabir, that the government wants big businesses to help their employees get low-cost five to ten-marla home loans for them. The government will be able to meet its goal of setting up a low-cost housing program while also meeting the country’s housing needs, says Baqir. During the discussion, Baqir also talked about the importance of the “Asian Finance Scheme,” which gives small and medium-sized businesses loans without having to put up any collateral.

Read more with EL news : The CDA has started working for civil work in Sector E-12/4

Members of the delegation from the LCCI also asked the governor to make trade promotion policies and policies that allow exports between the CAR and Russia.

Read more with EL news : The establishment of a riding club in the DHA Peshawar