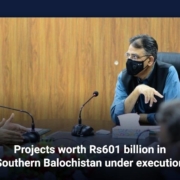 Projects worth Rs601 billion in Southern Baluchistan under execution. On Monday, Special Initiatives Minister Asad Umar stated that the government was dedicated to allocating the highest amount of federal resources possible to Baluchistan in order to expedite its development. According to a news release, he stated that the federal government would provide maximum development resources to Baluchistan in order to bring it up to par with other provinces, in line with Prime Minister Imran Khan’s agenda.

The minister addressed the National Workshop on Baluchistan on “Pakistan’s Future Trajectory and Development Projects.” Umar added that the prime minister’s vision was for the state to prioritize the development of the country’s most backward areas, which is why special development packages for Southern Baluchistan, Gilgit-Baltistan, and 14 priority districts of Sindh were announced alongside the Karachi Transformation Plan.

He highlighted the Southern Baluchistan Development Package, stating that it cost Rs601 billion in total and included 199 projects to create employment opportunities, health and education facilities, and digital connectivity in the area.

Additionally, the minister stated that digital Baluchistan would substantially contribute to job creation in the province. Diverse strata of society, including politicians and notables from Baluchistan, attended the workshop, which aimed to facilitate the exchange of opinions among participants via the lens of Baluchistan.

Khalid Mansoor, SAPM for CPEC Affairs, later updated the delegates on CPEC-related projects, stating that significant work was being done to elevate Baluchistan. Baluchistan’s development would link the province to other provinces and pave the path for regional connection, he added.