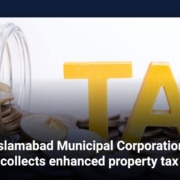 The CDA and MCI both filed appeals, which remain ongoing before the IHC’s two-member division bench. The MCI, on the other hand, began collecting the additional tax without first obtaining approval from the IHC.

The IHC deemed the 200 percent increase in property tax unconstitutional, noting that “no tax proposals were issued, no objections were requested following Section 88(4) of the ICT Local Government Act, 2015, and no public hearings were held before the application of the property tax in Islamabad.”

Subsequently, the court ruled that a new notification be issued within six months.

The court order stated: “MCI shall prepare the tax proposal and invite public comment via publication of notice in newspapers, following which a notification following Section 88 of the ICT Local Government Act, 2015 shall be issued following the law within six (06) months positively.”

However, because the local government was disbanded following the elected members’ five-year terms, the law could not be reviewed, according to Qazi Adil Aziz, a former legal counsel and chairman of UC-11, Islamabad.

On the other hand, the MCI distributed property bills to all residents and owners of residential and commercial properties earlier this month in compliance with the “invalid” notification on the letterhead of the CDA’s revenue directorate.

Shahid Iqbal, a resident of G-9, claimed he was required to deposit moreover Rs50,000 for his eight-marla house, although he previously paid only Rs15,000 in property tax.

Advocate Raja Inam Ameen Minhas, who also got a 200 percent increase in property tax, called it unjustified, stating that citizens cannot be forced to pay such a high tax without any value added to the service.

Additionally, the IHC’s judgment stated that “the CDA lacks jurisdiction and authority to assess or collect property taxes in any form, as this is the only prerogative of the MCI under the ICT Local Government Act, 2015. As a result, any tax demand made by the CDA is illegitimate.”

However, the MCI is depositing all tax revenue in CDA accounts.

When contacted, a CDA official stated that the MCI was collecting the tax according to section 132 of the LG Act and remitting it to the CDA for debt servicing.

Read more with EL news : After 32 years, college in Islamabad is still not functional

According to him, the CDA gave Rs20 billion to the MCI since the latter lacked the funds necessary to pay its employees’ wages and provide municipal services. Islamabad Municipal Corporation collects enhanced property tax

As a result, he explained, the CDA is not collecting taxes but is reclaiming the loan from the MCI.

Concerning collecting the 200 percent increase in property tax, the spokesman stated that they generated the invoices to understand that if the CDA’s appeals were denied, they would repay the additional sum to residents and property owners.

According to sources, since the federal cabinet shifted four directorates from the MCI to the CDA in October last year, the latter has had financial difficulties and has had to rely on tax collection.

Qazi Adil Aziz, the MCI’s former legal adviser, informed Dawn that the MCI owed a loan to the federal government. However, he stated that the municipal corporation could repay the debt as soon as it recovered taxes from citizens or generated revenue on its own.

He contended that the CDA could not recover the loan through tax collection, which is being conducted in defiance of a court order and an inappropriate manner.

The petitioners contended that the company abused its authority by approving a 200 percent increase and asked the court to reverse it. Islamabad Municipal Corporation collects enhanced property tax.

The MCI authorized the property tax hike in December 2019, making it effective on July 1, 2020. The revenue directorate was previously part of the CDA but was transferred to the MCI upon establishing a local government in 2016. The Islamabad Municipal Corporation levies a supplemental property tax.