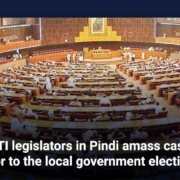 PTI Pindi legislators acquire cash before LG polls. According to PTI members of the national and provincial assemblies, the Punjab local government department has set aside Rs1.91 billion for development projects in Rawalpindi. This is in preparation for the local government elections that will be held soon.

Development funds have not been given to the districts of opposition party members, like MNA Raja Pervez Ashraf’s in Gujar Khan and Chaudhry Nisar Ali Khan’s in Gujar Khan.

People in the Rawalpindi division of Pakistan’s Punjab province are getting help with development projects in seven National Assembly seats and 15 Punjab Assembly seats.

It looks like the PTI is going to “sweep” the Punjab LG polls: PM Imran

It’s because their districts have been added to the Rawalpindi metropolitan corporation that they get more money for development. Sheikh Rashid Ahmed, Ejaz Khan Jazi, and Rashid Hafeez are all getting more money.

All of the PTI MNAs in NA-57 Murree have been given money, as well as the federal minister in NA-59 Rawalpindi, Ghulam Sarwar Khan. In NA-60 Rawalpindi City, PTI MNA Sheikh Rashid Shafiq has been given Rs126.39 million, while Mansoor Hayat Khan from NA-63 Taxila has been given Rs96.06 million.

A lot of money has been given to candidates in PP-6 Murree, PP-7 Kahuta, and PP-8 Gujar Khan. In PP-9 Gujar Khan, Chaudhry Sajid Mahmood was given 54.71 million, and Wasiq Qayyum Abbasi was given Rs176.01 million in PP-12.