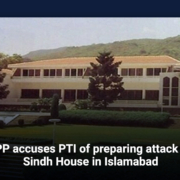 The Pakistan People’s Party (PPP) warned Thursday that the government was preparing to attack Sindh House in Islamabad after the Pakistan Tehreek-i-Insaf (PTI) claimed that some of its legislators were hiding in the building at the opposition’s request.

The government claimed that the opposition detained several ruling party lawmakers at Sindh House ahead of the vote on the no-confidence motion against Prime Minister Imran Khan, following a statement by Punjab Assembly Speaker Chaudhry Parvez Elahi that approximately a dozen PTI MNAs had ‘gone missing.

In a public address on Wednesday, the premier said that opposition leaders were sitting in Sindh House with “heaps of money” to buy the loyalty of treasury legislators, and he urged the election commission to investigate the alleged allegations horse-trading.

They claimed to have evidence indicating that the Islamabad police and the Pakistan People’s Party’s Tiger Force plotted the “attack.” According to the PPP legislators, if any damage is caused to Sindh House’s facilities or its members, the government will be held accountable, which would violate the law and the Constitution.

The PPP members stated that they requested housing in Sindh House because they felt unsafe at the Parliament Lodges following an Islamabad police operation last week to disperse members of the Ansarul Islam, a uniformed volunteer force of the Jamiat Ulema-i-Islam, who had entered the lodges in large numbers.

The MPs stated that they sought protection from the Sindh police as a legal and constitutional right in light of the Islamabad police’s “illegal raids and endangerment of lives.”

However, in a brief interview with media Thursday afternoon, Interior Minister Sheikh Rashid stated that no action against the Sindh House was planned. He responded to a journalist’s inquiry on allegations of a government action.

“At the moment, we are not taking any action against anyone. [The date] is a long way off. “He was referring to the date on which the no-trust motion would be voted on.

“A few persons occupy sindh House. They have dispatched 300-400 police officers. There is no issue. There are numerous days remaining, “The minister of the interior stated.

Earlier this month, PPP leader Faisal Karim Kundi stated that several MPs will be staying at Sindh House during a press conference with PPP MNA Shazia Marri. “Each member has the right to remain. These individuals represent the opposition and our friends “He added that MNAs were detained there for fear of being kidnapped ahead of the no-trust vote.

Marri further rejected the prime minister’s “false news” during the press conference with Kundi that PTI dissidents were being held at the Sindh House.

He wrote to the establishment secretary requesting an investigation into SSU Deputy Inspector General (DIG) Maqsood Memon for permitting the force to convene in the federal capital. Zaidi stated that the DIG should be suspended till the conclusion of the investigation.

Zaidi said a day ago that the force was posted at Sindh House to safeguard the “bags” of money intended to be used to “bribe” PTI MNAs.