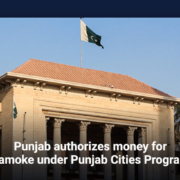 News sources said that on Saturday, September 17, the Punjab government gave PKR 2.7 billion for the development of Kamoke city.

The money comes from the World Bank-backed Punjab Cities Program (PCP), which the government has approved (WB). Under the project, Kamoke will get equipment, people, and money to help it grow and get better. Mian Mahmood-ur-Rasheed, the Punjab Minister for Local Government and Community Development (LGCD), told the media that Kamoke is one of the 16 tehsils that will be developed under PCP. He said that Kamoke will be given the resources it needs to become a beautiful city. He said that the money will be used to improve the water supply, sewer system, roads, street lighting, maintenance of parks, and handling of solid waste. Also, 22,000 empty seats in local government will be filled to make things run better.

It’s important to know that Kamoke is a city close to Lahore that is growing in size. But the city is also one of the underdeveloped cities in Punjab. So that people don’t move to bigger cities, the government has decided to give money to smaller cities.