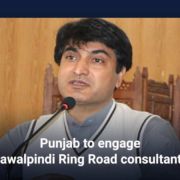 Rawalpindi: On August 28, news sources said that the government of Punjab will hire consultants to find the best routes for the Rawalpindi Ring Road (RRR) and set up an economic corridor along it.

The decision was made at a meeting of the Consultant Selection Committee (CSC) for mega projects. Rawalpindi Commissioner Noorul Amin Mengal was in charge of the meeting.

The committee decided that a firm would be chosen to study the project’s feasibility within 45 days, since the consultations for the two-phase project are expected to take 150 days. The following jobs will be done by the consulting firms:

Read: The RDA will hire a consultant for a third-party valuation of the Rawalpindi Ring Road.

The hired firm would work on the project in two stages. Phase-I would figure out the best path for the economic corridor and take 60 days to finish. Phase-II would plan for land use along the Ring Road’s third-party certified alignment and take 90 days to finish.

The company that was hired will choose a good route that makes it easy to get to and connect the twin cities of Islamabad and Rawalpindi.

According to the Project Concept-1 (PC-1), the proposed route will include things like industrial units, education and health zones, recreation areas, central business districts, theme parks, high-rise building zones, and the moving and setting up of commercial markets and truck/bus terminals.

It’s important to know that after PM Shehbaz Sharif’s trip to the UAE, the government has chosen five important projects for foreign investment. Among these projects are the Parco coastal refinery Phase-I oil import terminal, the Kharian-Rawalpindi Motorway, the Rawalpindi Ring Road, the Karachi Circular Railway, and the Thar Block-II railway network link.