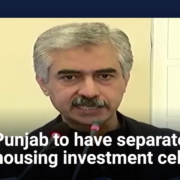 On August 13, news sources said that Mian Aslam Iqbal, the Punjab Minister for Housing and Urban Development, had asked the provincial departments to set up a special overseas investment cell to get more non-Resident Pakistanis (NRPs) involved in the housing market.

The goal of the cell is to get NRP to put more money into the Naya Pakistan Housing Program, which builds low-cost housing developments (NPHP). The minister said that the participation of NRPs would be important because it would bring foreign currency into the country and help its economy. At that time, the minister looked at how the different housing plans set up under the NPHP were coming along. He said that there would be no more delays in finishing the project. He said that the projects are for the good of the public and that they must be finished on time to help the people. He was also told about many different efforts and given the necessary orders.

It is important to note that the NPHP was started by the government in 2019 to help solve the housing crisis in the country. As part of the project, the government started a lot of low-cost housing projects and helped people get mortgages through banks.