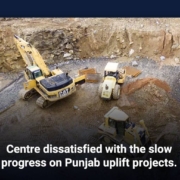 Centre dissatisfied with the slow progress on Punjab uplift projects. On Wednesday, the MEA voiced worry about the poor pace of six $963 million development projects in Punjab financed by foreign loans and advocated for their acceleration.

Following the conference, the Punjab government’s development projects were examined by the National Coordination Committee on Foreign-Funded Projects (NCC-FFP).

There were also representatives from Punjab’s Planning and Development Board and the Prime Minister’s Office.

The Punjab government is now implementing 26 projects worth $6 billion funded by the Asian Development Bank, the World Bank, the International Fund for Agricultural Development (IFAD), China, Japan, France, and the United Kingdom.

In addition to enhancing agricultural productivity, the Jalalpur Irrigation Project will help alleviate rural poverty and improve rural quality of life. He said that the project must be completed.

The project was initially delayed due to land acquisition concerns, but was now moving forward and would be completed by the first quarter of 2024. This project would build 200km of new irrigation canals in Pind Dadan Khan and Khushab, directly benefiting over 200,000 peasants. The minister directed the Punjab Agriculture & Rural Transformation Programme to be completed on time.

In the Punjab Intermediate Cities Improvement Investment Project, sub-projects are finalised and approved by departments concerned. The project goal is to improve the quality of life in Sahiwal and Sialkot by enhancing urban infrastructure and services.

The province administration reported great development on the Multan-Vehari Road under the PPP modality.

Installation of Weather Surveillance Radar in Multan was also discussed at the conference.