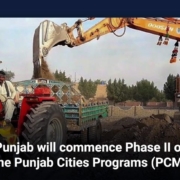 There are 16 municipalities taking part in the project, according to sources. They include the cities of Jhang and Okara; the villages of Kamoke and Muridke; the towns of Wazirabad and Gojra; the towns of Bahawalnagar and Burewala; the towns of Khanewal and Daska; the towns of Hafizabad and Kotaddu; and the towns of Kotaddu and Vehari. All of the project’s Phase II components, including water supply, solid waste management, wastewater treatment facilities, sewerage and storm drainage, urban highways, parks, and streetlights, will be operational by the end of the year.

Read more with EL news : The government approves PCB’s plan to build a stadium in Islamabad

According to media sources, the International Development Association (IDA) launched the program in 2018 with a USD 200 million performance-based funding package. The program’s overall purpose is to assist 16 urban local governments in Punjab in developing improved urban infrastructure that will accelerate economic growth and development, eradicate extreme poverty, and the promotion of shared prosperity. Punjab will begin Phase II of the Punjab Cities Programs in the coming months (PCM).