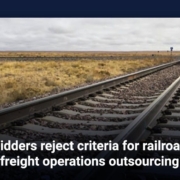 Rejecting the evaluation process, bidders have urged the public relations (PR) authorities to review the facts thoroughly, bidding documents, rates, and requests for proposal (RFP) and ensure that projects are awarded to qualified firms based on merit.

“Ten of the thirteen bidders have rejected the evaluation criteria for the bidding process, which began in February and concluded in August. Thus, after nearly six months, the typical bureaucratic and anti-private sector culture and favoritism within the PR, which are also responsible for its demise, finally worked,” an official source lamented in an interview on Friday. Outsourcing railroad freight operations fails to attract bidders.

According to the letter written by one of the firms to the chairman of the PR’s Grievance Committee, the firm developed a detailed plan and submitted its bid “to ensure the highest yield per wagon per annum” following the RFP document’s requirements.

“However, to our surprise, we received a letter from the chief marketing manager’s office on Aug 31 notifying us of the rejection of our ‘financial bid’ because our offered bid rates were lower than the PR’s previously notified rates for the destinations for which we submitted our bid,” the letter reads.

It deemed the reason unjustified, claiming that the railways did not include a complete schedule of existing notified rates for all destinations in the RFP, nor did they have any instructions directing all interested parties to use any benchmark rates as a reserve price’ when submitting bids. Outsourcing railroad freight operations fails to attract bidders.

On the contrary, the RFP’s instructions and, more precisely, the Financial Proposal Submission Form Multiple Train Options’ Note stated unequivocally that “the bid would be evaluated based on the highest yield per wagon per year subject to the loading and unloading yards’ maximum capacity.” Moreover, there was no mention of the tariff in the minutes of the pre-bid meetings.

The RFP clarifies that the bidder with the highest annual yield per wagon will be declared successful. Imposing any new criterion or requirement at this stage that restricts a bidder’s participation is thus deemed unjust and discriminatory.

Another firm also wrote a letter, stating: “We are stunned by your decision because it is critical to understand that the tender guarantees annual earnings for PR regardless of whether the wagon is partially or fully loaded (up to the amount specified in the RFP) at the time specified by PR.” Thus, earnings guarantee PR ‘full payments’ even when less volume is loaded on a wagon; any comparison to per tonne or tonne-kilometer rates becomes speculative, arbitrary, and erroneous. Outsourcing railroad freight operations fails to attract bidders.

“It is extremely unfortunate, illegal, discriminatory, and arbitrary that PR, despite repeatedly stating in the RFP that the criteria for awarding the tender were ‘highest yield per wagon per annum,’ arbitrarily added a new evaluation standard to reject our bid post bid.”