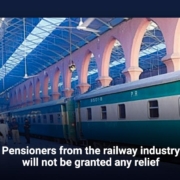 The situation of pensioners who work for Pakistan Railways, the country’s largest state-owned company, is getting worse. It’s possible that not all of the pensioners will get their delayed monthly pension this month because the finance ministry hasn’t released the full amount.

Sources in the railways ministry told  that the finance ministry had been asked to spend Rs48 billion a year on pensions, but only Rs42 billion was released. Out of that, Rs36 billion had already been given to pensioners.

In the next few months, Pakistan Railways (PR) might not be able to pay pensions to retired workers and their widows unless the finance ministry gives them the rest.

In the past, the government has turned down a plan to set up a pension fund.

People who have talked to them say that the rail ministry is in talks with the finance ministry about taking over the payment of pensions for rail workers, just like other government departments and civil servants get their pensions. If this is the case, no decision has so far been made in this case.

March 1 was when the secretary of transportation asked for the transfer of pension payments for Pakistani Railway workers to the Controller General Accounts and Auditor General for Pakistan Revenue. This is what the letter said. Another thing the letter said was that the pension payment roll was ready for the transfer of pension on March 1. However, the account for pensions doesn’t have enough money in it, and the finance ministry doesn’t seem to care.

About 125,000 PR pensioners were mentioned in the letter to the finance secretary. The letter warned that the situation could lead to unrest among the pensioners, which could be embarrassing for the government. This would be a bad thing for them. It will also be against Supreme Court orders if the pension payment isn’t made on time.

There is still no decision from the ministries of rail and finance. Pensioners, especially low-paid and widowed ones, are still having problems getting their money on time. It has been said that two commercial banks that are supposed to pay pensions haven’t yet received scrolls that say how much money they should pay.

It’s because of official holidays that all banks are closed, so pension payments won’t be possible until the banks open again.

There was a proposal from the railways ministry to make it easier for pensioners to be paid directly like other government workers. The finance ministry hasn’t yet made a decision on the proposal.

The goal of setting up the fund was to cover the costs of pensions for employees in the future. There has been a lot of delay in setting up the pension fund, so there hasn’t been a pension reserve until now. The lack of a credible estimate of pension liabilities has also made it difficult for the government to make changes to the way it spends money on pensions.

People who work for Pakistan Railways have a Defined Benefit (DB) pension plan that they pay for as they go. In the absence of a pension fund, the federal government is now paying for the pension costs of Pakistan Railways.