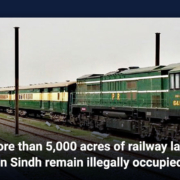 More than 5,000 acres of railway land in Sindh remain illegally occupied. Over 5,000 acres of Pakistan Railways (PR) land has been infringed upon in Sindh and has been used for residential, commercial, and agricultural purposes by various individuals, groups, and even business organizations for many years.

It was shown during the National Assembly’s Standing Committee on Railways meeting, held at the City Station’s divisional superintendent’s office.

Tuesday’s session marked the start of the committee’s three-day stay in the city.

Agriculture, commercial, and religious activities are conducted on encroached land.

DS-Karachi Hanif Gul briefed the committee on the current status of PR’s encroached land, noting that despite an aggressive anti-encroachment operation coordinated with law enforcement agencies, a sizable portion of PR’s property remained illegal use.

“The committee members were informed that the PR owned 45,663 acres of land in its Karachi and Sukkur divisions, with 39,759 acres in operational use,” according to a statement released following the NA committee’s visit.

“Approximately 1,810 acres of railway land has been encroached upon for residential purposes, 291 acres for commercial purposes, 2,968 acres for agriculture, and 112 acres for mosques and imambargahs,” the body was informed.

There are 48 trains that operate from the Karachi division.
Additionally, the public relations officers briefed the meeting on their efforts to recover thousands of acres during operations against encroachment.

Read more with EL news : The Makkah Terrace in Karachi has been demolished by the SHC

During the meeting, the committee recommended improvements to railway operations, including an increase in passenger trains, station upgrades, and train punctuality.

Mr. Gul informed the committee members that the Karachi division was serviced by 48 trains. He said that eight operate intercity services, 36 operate mail or express trains, and four operate on the Karachi Circular Railway (KCR).

“In terms of punctuality, the Karachi division has maintained an average of 81.21 percent,” the statement quoted the DS as telling the NA committee.

“The committee was informed that the China Creek single-line bridge had been restored and that the tracks had been completely renewed. Three trains, including the Shah Latif Express, the Saman Sarkar Express, and the Marvi Express, were restored this year to improve passenger convenience and public service delivery.”

The DS-Karachi also informed the meeting that the Hyderabad Electric Supply Company (Hesco) and Sukkur Electric Power Company (SEPCO) had completed the installation of high tension and low tension networks in PR’s residential colonies in Hyderabad, Tando Adam, and Mirpurkhas.

He stated that K-Electric had signed an agreement to install the same networks in railway colonies throughout Karachi.