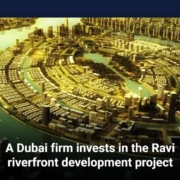 A Dubai firm invests in the Ravi riverfront development project. The Ravi Urban Development Authority (Ruda) has inked an agreement with a Dubai-based company to build an echo system, an innovation city, and other environmentally friendly initiatives at Pakistan’s first high-tech metropolis, the Ravi Riverfront Urban Development Project (RRUDP).

Under the terms of the MoU, the business has promised to invest $500 million in various projects. An official agreement, on the other hand, will be signed at a later date.

“We recently inked a series of memorandums of understanding totalling $1.4 billion — the project’s first mega-foreign investment.” The MoUs contain a $500 million commitment — the largest of its kind — through which the firm will start numerous initiatives linked to the echo system, innovation city, and so on,” Ruda CEO told.

Read more with EL news : The reconstruction of the old GT Road has begun

The plan calls for the establishment of a theme park and the development of tourism attractions.

“All Memorandums of Understanding were recently signed at Dubai Expo-2020, which is currently underway. I believe it indicates foreign investors’ confidence in Pakistan,” he added.

According to the Ruda leader, the other memorandums of understanding inked included the construction of a theme park and promotion of tourist activities and the formation of an industrial zone. “The industrial zone would be created on 600 acres of land,” he explained.

He stated that Pakistan’s pavilion at the Dubai expo continued to attract foreign investors interested in the Ravi project and other areas.

Several travellers were apprehended without tickets during inspections. Additionally, the teams levied fines totaling more than Rs90,000, a spokeswoman said.