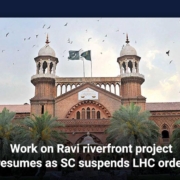 Work on Ravi riverfront project resumes as SC suspends LHC order. On Monday, the Supreme Court of Pakistan overturned the Lahore High Court’s decision to scrap the Ravi Riv­er­front Urban Development Project. The government can now build on the land where the owners were compensated.

When the LHC decided on the Ravi Urban Development Authority (Ruda) Act 2020 on January 25, it was terrible news for the government. The LHC said that several parts of the act were unconstitutional.

After that, Prime Minister Imran Khan said that his government’s legal team couldn’t present the case to the LHC effectively, and then he said that the administration would go to the apex court to fight the high court’s decision.

During today’s hearing, a three-member bench led by Justice Ijazul Ahsan set aside the LHC ruling and said that the construction could go ahead on land where the owners had been paid. However, it stopped the government from working on the ground where the real owners hadn’t been born yet.

The bench also asked Advocate General Punjab Ahmed Owais why he didn’t file an appeal against the high court’s decision in his court. The attorney general said that the Supreme Court was the best place to get help.

The top court said it would look into whether intra-court appeals can be made. It also said that the people in the case could submit more documents within a month.

The verdict of the LHC is in.
LHC Justice Shahid Karim also said that taking land from farmers to make way for the project was unconstitutional and violated people’s fundamental rights. The project was scrapped.

When he was done, he had told the Ravi Urban Development Authority to return a loan of Rs5 billion to the Punjab government in two months. He also said they didn’t follow laws and started the project without a master plan.

Read more with EL news : The construction industry has requested support from the government

Petitioners for farmers and landowners and developers came from lawyers Sheraz Zaka, Ahmad Rafay Alam, Azhar Siddique, Waqar A. Sheikh, and many others, who filed them for them.

The petitioners were unhappy with how the Ravi Urban Development Authority bought land for the project. There were protests from people who owned land that was being taken, but the land acquisition collector still gave out 18 awards worth billions of dollars.

People in Punjab aren’t happy with the way the government is going.
On Friday, the provincial government quickly filed an appeal with the Supreme Court through Punjab Advocate General Ahmed Awais. The government said that the high court did not consider that the Ruda ordinance already adopted the 2015 Master Plan of the Lahore Development Authority and covered almost all of the Ravi Riverfront Urban Development Project projects.

People who signed the petition said they were sad that the $20 billion projects were done with a pen stroke. The high court ruled that some parts of the Act were unconstitutional. The LHC said it couldn’t do anything because the Supreme Court had made many different decisions. It would stop the whole development process, it said.

It said that the LHC didn’t know that the Environmental Impact Assessment for the project under Section 12 of the Punjab Environmental Protection Act 1997 had already been approved, so the case should not have gone forward with unsubstantiated and vague claims.

The project gets the support of the PM.
Prime Minister: On Friday, he recorded a video message at the project site, where he also learned a lot about the billion-dollar project.

The prime minister said that creating a new planned city after Islamabad isn’t what this project is about.

He also said that the project would save the River Ravi because wastewater treatment plants would be built to clean sewage before being sent to the river. It would be built on the riverbed to hold water and help Lahore city’s water level rise.

When Imran talked about his plan to build a riverfront project, he said it would help 40 industries, create hundreds of jobs, and bring in much-needed money. He said a lot of money from other countries has already come to Pakistan for this project.

He said the $20 billion projects had been planned down to the last detail, just like modern cities in Malaysia and Dubai so that it would be just like them.