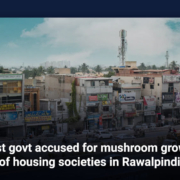 RDA Chairman Tariq Mehmood Murtaza said the civic authority was a legal organization that oversaw the city’s development and planning. He suggested existing laws needed to be strengthened. He said the RDA has approved the TORs for rewriting Rawalpindi’s master plan and requested expressions of interest from reputable consultancy firms. These are 25-year plans that include all sectors and prioritized operations in the district, he said.

It drew up Rawalpindi’s first master plan in 1968 as the city expanded haphazardly. But never implemented it, and over 30 years later, a board of authorities developed another master plan for 1996 to 2016.

According to the chief of Rawalpindi Development Authority, due to a lack of professional competence and capability, unlawful housing designs were forming without authorization from the defunct district council.

From 2013 to 2019, the RDA approved six proposals and took legal action against the remainder under the Punjab Private Housing and Land Subdivision Rules 2010.

During 2013-19, the RDA issued 292 legal notifications, 78 challans, 99 FIRs, locked 106 offices, and removed illegal housing plan gates and signs. The district collector was also asked to cease land transactions in these schemes, and utility departments including Iesco, SNGPL, and PTCL were asked not to extend their services. In addition, the city’s marketing/booking offices were sealed. The RDA website now has the scheme status. He claimed the RDA had asked the Pakistan Electronic Media Regulatory Authority (Pemra) not to run commercials for unlawful housing societies. The government of Pakistan and the Federal Investigation Agency (FIA) have also been requested to block bank/social media accounts of illegal housing society’s owners/followers.

He distinguished between agricultural and non-agricultural land. Except for a few tiny plots, the housing developments are built on vacant/barren land.

Plans and approaches differ between the Punjab Local Government Land Use Rules 2020 and the Punjab Development Authorities Rules 2021.

The Local Government Rules 2020 do not cover peri-urban areas and only offer a restricted range of development zones. Agribusiness is one of the principal uses of land in big cities where development authorities have been established, he added. The former district council used to have authority over the major sections of Rawalpindi, where new and under-construction housing complexes exist (MCR).

He stated that the MCR and TMA were in charge of construction control in regions where criminal organizations mushroomed, but they failed.

He claimed they delayed the modification of Rawalpindi’s master plan since 2016 due to jurisdictional issues.