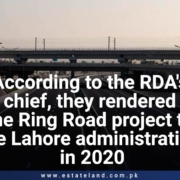 However, he did say that RDA was working on the Leh Nullah Expressway and Flood Channel Project and that the Punjab government had set up Rs30.2 billion in the Annual Development Programme for land acquisition for the Lehman Nullah Project (ADP).

He stated that he would build a highway to give tourists an alternate route from Rawalpindi to Murree and reach new tourist attractions. The road will run through four tehsils in Rawalpindi at the same time.

He told the news conference that development on the project would begin shortly and help the region’s tourism.

A new approval method for private housing societies and building plans has been established:

He claims that more than 1,600 residential and multi-story building maps have been approved this year, a new high. As a result, income has climbed to Rs1 billion in the last three years.

RDA collected Rs559 million in revenue in 2020-21, compared to a target of Rs295 million. According to him, the recruiting process is being carried out by the Punjab Public Service Commission since the Punjab government believes in merit. “Eleven officials will be appointed very shortly, including four sub engineers and one assistant,” he stated.

He stated that since July 2018, the RDA had taken indiscriminate action against all dynamic schemes, registering 307 legal notices, 91 challans, and 112 first information reports (FIRs). In addition, RDA has sealed 135 schemes’ offices, 61 schemes’ gates, and 61 schemes’ billboards.

On occasion, he stated that the RDA had begun digitalization in line with Prime Minister Imran Khan’s aim of digitizing Pakistan. In RDA, a One-Stop Operation Center with contemporary facilities has been established.

“Digital maps of residential and commercial properties are received and approved in less than 30 days. In addition, the State Management Directorate of the RDA’s documents have been digitized, and work on process automation for public convenience has begun in the next phase,” he stated.

In terms of RDA projects, he said the two-lane Qadeer Khan Road from Missile Chowk to Falcon Complex (1.75 km) was completed under the ADP program for Rs223.6 million. The original Airport Road Flying Club was rehabilitated and expanded to Koral Chowk (3.45 km) for Rs443 million. At the cost of Rs14.5 million, completed a feasibility study for Katcheri Chowk and Defense Chowk.

He stated that repair and expansion work from Dry Port Road to Airport Road to the Prime Minister’s New Pakistan Housing Scheme is now underway for Rs443.1 million. The anticipated cost of pedestrian bridges on the old Airport Road under ADP is Rs109.9 million, and development on the project is now underway.

According to the RDA chairman, Wasa has completed the cleaning of Leh Nullah well ahead of the monsoon season. The twin towns received record rainfall, and the Leh Nullah was raised to 21 feet at Katarian Bridge and 17 feet at Gawalmandi Bridge, yet the city did not flood. With a subsidy of Rs30 million from the Punjab government, finished the work on Leh Nullah’s cleanliness in June.

Read more with EL news: The P&D Board is opposing PC-I of the Ring Road project