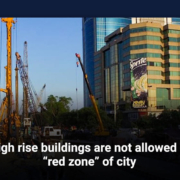 Efforts to allow high-rise in the city’s “red zone” in the violation of official rules. Even though the government has already designated a vast area of over 2,000 Kanals in the central business district – Gulberg, Ferozepur Road, and Walton Road – for high-rise construction to promote the city’s vertical growth, some Punjab government officials appear desperate to amend the Government Area Housing Scheme (GAHS)-2006 (amended) and relax rules to allow cons.

A powerful business tycoon is launching the project on a plot of land measuring approximately 17 kanals at China Chowk (Racecourse Road), close to important buildings such as the Governor House, the provincial office of a strategic institution, and GOR-1, among others, in an area known as Lahore’s Red Zone.

“We are perplexed as to why this is being done with such haste. For example, if the laws are changed to enable the construction of a 332-foot tall structure, the value of a plot in the area will suddenly skyrocket to nearly 15 times its current value (Rs10 billion to 150bn). Additionally, it will pave the path for future projects of this nature in such a sensitive area,” an official source familiar with the matter told Dawn.

Wasa, Tepa, and LDA all expressed opposition to the scheme.

According to a plan submitted to the concerned quarters, a private builder intends to construct a commercial-combined-apartment building on a plot measuring 16 kanals, 15 marlas, and 31-Sft (75406-Sft) with a total covered area of 1136258-Sft (property Khasra No.15611/47/1, Khatoni No 5876 in Mouza Mozang, Lahore.

According to the updated master plan for Lahore Division, the proposed project is located in the Residential Land-Use Zone. On the other hand, the Race Course Road is featured in List “A.” (approved road for commercialization). However, the Lahore Development Authority (LDA) permitted commercialization of the instant property on payment of a charge of Rs108.894 million without examining the relevant requirements of the GAHS-2006 laws, rules, and regulations. According to the modified master plan of GHAS-2006, the site is located within a two-kanal residential zone.

After receiving an application in March 2019, the Lahore Metropolitan Corporation’s responsible officials expressed objections to the plan in April 2019, followed by another application from the builder firm to the parent department that same month.

The agency also solicited opinions from the corporation that month, which it received in May.

According to another document, the Association of Builders and Developers of Pakistan (ABAD) also filed an application with the Punjab chief secretary on April 7, this year, expressing their support for the vision of thriving the construction industry and housing sector, as well as boosting the city’s vertical growth. The ABAD chairman explained the GAHS’s history, including its notice and legal status, in the application. He noted that to achieve the prime minister’s vision of an abrupt increase of residential units, it was necessary to adjust GAHS restrictions for land’s optimal use within its present radius. Based on these grounds, the chairman requested that a radius of 1,200 feet around the Governor House’s perimeter wall be designated and the remainder of the region be excluded from this concept.

A high-level committee has already been established to consider this matter. According to the document, during its first meeting in August last year, the committee asked the chief corporation officer (CCO) and metropolitan officer (planning) to conduct a field assessment of the land usage and height of buildings inside the GAHS’s existing boundaries.

High rise buildings are not allowed in “red zone” of city.

Additionally, it was determined to investigate the built-up area on the ground to determine whether certain land areas should be classed as commercial areas/business zones, considering their location and economic potential. Finally, participants in the discussion emphasized the value and conservation of green open spaces within the GHAS.

Under the committee’s conclusions, we surveyed the current land use and building heights inside the existing GAHS region. The MCL suggested a revised map of the GAHS based on the survey findings, taking the ABAD chairman’s recommendation into account, by limiting the GAHS jurisdiction by approximately 1,200 feet from the outer wall of the Governor House along existing routes for efficient enforcement. With this proposed amendment, the GAHS boundary was extended from Faisal Chowk along Queens Road to Lawrence Road to Race Course Road (from China Chowk to the Children Complex Library) to Link Club Road to Club Chowk, then from Club Chowk to Sundardas Road (along the road that connects Aitcheson College to the principal’s and others’ residences) to Mayo Garden to Durand Road along with Queens Marry Coll. In addition, it proposed that the GHAS’s land use provisions and other by-laws stay unchanged. Efforts to allow high-rise in the city’s “red zone” in the violation of official rules.

According to the minutes of a meeting last month, presided over by a minister, the participants unanimously agreed that the Lahore deputy commissioner (DC), in collaboration with the CCO, would conduct a comprehensive security audit of the proposal to limit GAHS to approximately 300 meters from the outer boundary of the Governor House and submit a report.

According to another source, the concerned quarters should evaluate a region before permitting such a massive project. And suppose it lies within a controlled building area (CBD). In that case, the government may legally announce and transfer it to the CBD Authority (which was recently founded for this reason in the instance of Lahore) for infrastructural upgrades, rather than allowing skyscrapers without prior planning. High rise buildings are not allowed in “red zone” of city.

“The project is located within the notified area, GAHS, where such a height is not permitted for the security and other reasons, including preserving the area’s holiness and unique character,” he explained. “It is a matter of height, as well as GAHS-2006 (as modified), which prohibits such structures. The LDA’s general bylaws, rules, and regulations, which the MCL also accepted, limit structures on such a route to 90 feet in height. That is why efforts are being made first to exclude this area from the GAHS and then to relax the rules imposing a 90-foot height restriction to allow construction up to 332 feet,” the source claimed, citing the Rawalpindi Ring Road as an example of how they changed the rules and laws to benefit developers.

Since the Lahore DC, commissioner, MCL administrator, and CCO were unavailable for comment despite repeated calls from this reporter, Chief Engineer Abdul Razaq Chauhan of the Traffic Engineering and Transport Planning Agency (Tepa), who attended a meeting last month as a member of the committee, stated that the LDA, Tepa, and Wasa were opposed to the skyscraper construction.

“Wasa asserts that it will impose an undue load on the water supply and sewerage systems. We (Tepa) believe it will exacerbate traffic congestion on surrounding roads, while the LDA notes that current ordinances prohibit development to that height,” he added.

Efforts to allow high-rise in the city’s “red zone” in the violation of official rules.