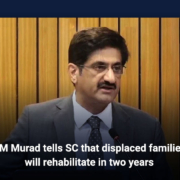 CM Murad tells SC that displaced families will rehabilitate in two years. The Supreme Court expressed grave resentment on Monday against provincial and local governments for failing to address the issue of encroachment on public spaces, illegal constructions, and unauthorized allotments and making little progress in rehabilitating affected residents following a demolition drive in three nullahs of the city.

A three-judge bench led by Chief Justice of Pakistan Gulzar Ahmed observed that Karachi’s civic agencies were powerless and officials were fearful of transfer after the director-general of the Karachi Development Authority (KDA) informed the court that he had obtained a stay order from the high court against his removal less than three months after his appointment.

The CM testified in court that while the cabinet initially allocated Rs1 billion and 250 acres of land to resettle displaced persons, the project would require approximately Rs10 billion to finish.

The bench expressed its concern with the CM’s repeated attempts to argue that they could pay Rs10 billion for such a project from cash lodged with the Supreme Court by Bahria Town Karachi.

Additionally, he argued that the federal government was not appropriately allocating revenue to the province.

Justice Ahsan advised the CM not to bank on the money still in the air because the matter was still pending before the apex court’s implementation bench. “It is the government’s constitutional and legal obligation to resettle displaced persons,” the court continued.

Finally, the chief minister agreed and told the bench that the remaining Rs9bn would be generated/arranged by the provincial government. They would complete the restoration process within two years.

Regarding the clearance of encroachments, Mr Shah stated that they were following court orders. Still, there was also a human aspect to consider regarding the relocation of individuals, for which he sought assistance from the bench.

According to Justice Ahsan, the officials in question improperly leased land surrounding nullahs to residents and enabled them to construct residences.

Also Read :When it came to the allocation of plots, consulted the SC

He inquired who was governing the city, given that its municipal agencies were weak and even the city’s master plan had vanished, noting that civic authorities were virtually inoperative.

Additionally, the judge stated a systemic failure. This city required a proper system and organization to function correctly, noting that the CM was not supposed to control the city but rather the province.

Referring to the KDA chief’s statement over his transfer order, Justice Ahsan stated that the provincial government must support such institutions for the city’s greater good. CM Murad tells SC that displaced families will rehabilitate displaced families in two years.

Justice Ahsan recalled the Sindh attorney general’s comments during the last hearing that the province lacked funds to rehabilitate affected persons and stated that it was a problematic scenario that the country’s second-largest area could make such a statement.

The chief minister asserted that the law empowered civic authorities. He maintained, however, that they were short of human resources, as 12 grade-21 officer positions remained unfilled due to the federal government’s failure to furnish such officers despite several requests.

The judge directed Khalid Jawed Khan, Pakistan’s Attorney General, who was present during the proceedings, to resolve the matter.

The chief minister stated that the Sindh Public Service Commission has been dysfunctional since April due to a ruling by the Sindh High Court, which the government has appealed to the Supreme Court. He requested that the CJP take up the matter.

The CJP questioned the CM on the city’s lack of new housing societies during the last 40 years, noting that the situation in Hyderabad, Sukkur, and other parts of the province was similar to that in Karachi, with encroachments and a lack of infrastructure.

The CJP stated that the ordinary man had no access to the CM and his ministers and that the province’s local government system needed to be restored.

Concerning the transfer and posting of officers, Justice Ahsan stated that the apex court had issued a judgement in this respect and that authorities who were cornered would need to record compelling reasons in writing if they transferred an officer before the time specified in the decision.

Wahab arouses the wrath of the SC

The SC bench lashed out at Karachi Administrator Murtaza Wahab for encroachments on amenity plots and other public spaces and the failure of municipal authorities to clear them, ordering him to submit a report on the encroachments and the steps taken to restore parks and amenity plots.

According to the administrator, the provincial metropolis had 136 ST plots (amenity plots) in district South, 64 in West, 11 in East, and eight in Central. CM Murad tells SC that displaced families will rehabilitate displaced families in two years.

When the bench inquired what steps had been done to restore such plots to their intended uses, the administrator requested time and argued that there was a human factor involved.

He was ignored by the CJP, who stated that he was summoned not to offer a lesson on human rights but to inform the bench about the steps taken to clear the city’s public places of encroachers.

The administrator stated that they had digitalized the revenue earned by parks, businesses, and huts the Karachi Metropolitan Corporation held. He attempted to boost the KMC’s revenue by increasing the revenue generated by filling stations located on KMC territory.

At this point, Justice Ahsan stated that the apex court had issued a ruling about filling stations and that they must grant an auction and space at market rates.

The CJP asked the administrator to disclose all information about encroachments on city roads, footpaths, amenity plots, parks, and any other public spaces and the number of vacated public areas.

Mr Wahab stated that the KMC administered 46 parks; however, a representative of the NGO Shehri pointed out that only those parks covering an area of two acres fell under the KMC’s administrative responsibility, while district municipal corporations administered the remainder.

The CJP conveyed his disapproval with the administrator once more, saying, “Do not attempt to be extra clever.”

A master plan that has been approved is desired

Additionally, the bench asked the KDA head to produce historical land records and the city’s authorised master plan within one week, specifics about ST plots, and to make attempts to restore amenity plots.

After being informed that the master plan division was not under the KDA’s administrative jurisdiction, the bench also summoned the senior director-master plan and his file. Its staff were also refusing to cooperate. CM Murad tells SC that displaced families will rehabilitate displaced families in two years.

KDA DG Asif Memon informed the bench that he started office on Aug 4 but was relieved of his duties and replaced by an “OPS officer.” He stated, however, that he obtained a stay order from the SHC.

He informed the bench that when he inquired of the local government minister whether he or the chief minister were upset with his appointment, the minister said that the “system” was not pleased.

According to the CJP, the “system” was working outside the country. However, the KDA-DG stated that several individuals associated with the “system” were also there.