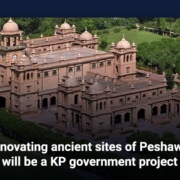 Peshawar’s old city will be cleaned up and restored, and the Khyber Pakhtunkhwa government will come up with a plan for how to do that.

According to a statement, CM Mahmood Khan has told the Peshawar commissioner to come up with a detailed feasibility plan for this. He led a meeting here on Sunday to look at how things were going in Peshawar.

Read more with EL news : PR executive has a strategy to make you love trains again

The CM checks on the progress of different development projects.

The meeting was told that, in addition to other steps to improve traffic in Peshawar, the city’s main bus station was moving out of the city. A new bus station on the Northern Bypass is being built, and soon the ground will be broken for it, it was said.

There are now two parts of the project that are being worked on at the same time. It will be finished by October 2023 at a cost of Rs3.5 billion. The meeting was told that the construction of Hazar Khawani Park was done and that the park would soon be open to the public.

There has been a lot of progress made on a huge housing project called New Peshawar City. It’s beginning to buy land for the land-sharing scheme.

The feasibility study, planning, and prolong design of the project would be done by May of this year. The project management unit is still looking for people to work there, but things are moving along well.

The chief minister told the people in charge of hiring for the project management unit to finish the process in a month and follow all the rules and regulations. It should be made sure that there is merit in every way possible.

Construction of the rest of the Ring Road from Warsak Road to Nasir Bagh, it was said, was done. The land acquiring process for the project was done, and the provincial government gave Rs2.8 billion. Finally, the revised PC-I of the project was sent to ECNEC to get the final OK from them. In order to finish the project, it would cost Rs14.7 billion to do so.

The meeting also talked about land disputes in some parts of Regi Model Town. The chief minister told the officials to try to solve the problem through dialogue.