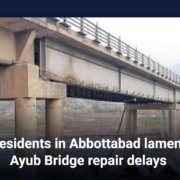 Residents in Abbottabad lament Ayub Bridge repair delays. People in the area have been complaining about the National Highway Authority’s (NHA) failure to fix a part of the Ayub Bridge in Havelian tehsil, Pakistan, even though they have asked them to.

People who live in Abbottabad, Galiyat, the Kaghan valley, and Gilgit Baltistan can get to the rest of the country through the Ayub Bridge that was built in the early 1970s.

When the river was flooded in July 2021, the National Highway Authority had to move traffic to the Langra Bridge, which was meant for light traffic only. This caused the bridge to break down.

There is so much traffic that it takes 30 minutes to an hour every day to cross the Langra Bridge because of it. Abdul Qadeer is the government worker who travels by public transportation every day from Haripur to Abbottabad and back.

A traffic police officer who didn’t want to be named said that the old Havelian Bazaar Road was rerouted through the Langra Bridge, which caused a lot of traffic. It was because of this that the Langra Bridge was also at risk of damage.

The Ayub Bridge may have been damaged by people illegally excavating sand and stone beneath it, but the authorities who should have done something about it didn’t.

It would have been safe if the mines and minerals department had acted quickly to stop the illegal activity, Shah said, adding that commuters had been suffering from mental stress and inconvenience for the last six months because of it.

When Dawn called, Zafar Hayat, the director of maintenance for the north of the NHA, said that work was being done on the bridge’s damaged parts.

There will be a total cost of Rs45 million for the bridge’s repair, he told us. The bridge will be back open to traffic in the next four months. He said that the quality of construction work and its completion on time would be guaranteed.